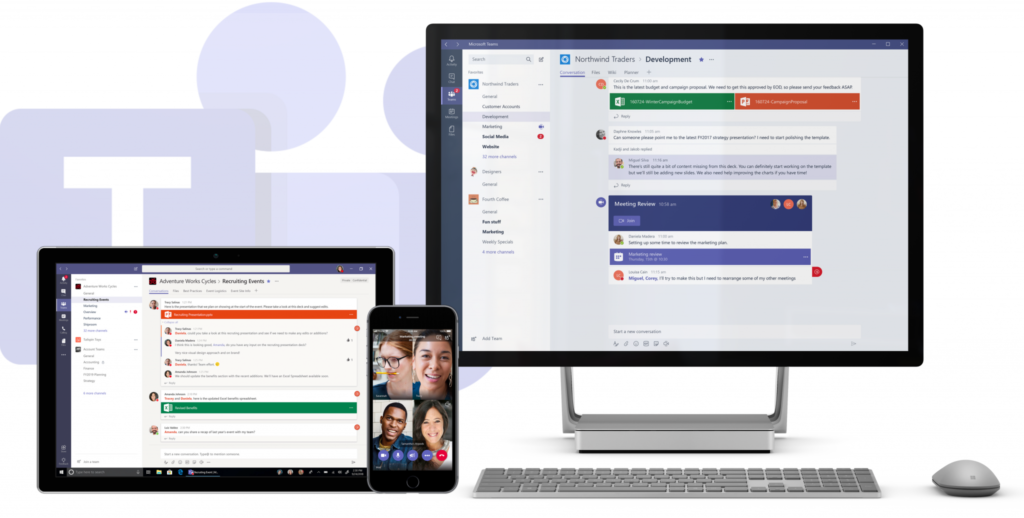 Released in 2017, Microsoft Teams is a communication and collaboration platform that evolved from the already popular Microsoft’s Skype for Business. It is a central hub for workplace conversations that integrates most of the services included in the Microsoft 365 suite. It offers everything from meeting and video conferencing, chat conversations, and file storage while still providing extensibility endpoints so that anyone could build business processes and applications inside Teams. This is a relatively new tool which is transforming the way people work and collaborate around the world. Although, video conferencing tools have been around for some time, it was only in the recent years that these tools have garnered so much attention. Coming back to Teams, it comes with two different plans: a free version that is free to use for anyone and a paid version that is included in the Microsoft 365 (formerly Office 365) Business plans.

What is Microsoft Teams Free?

Microsoft Teams is a great video communication and collaboration platform that provides a chat-based workspace where team members can hold virtual meetings and conferences, share ideas and files, and make video calls, etc. The communication can be done with a large group of people in chat, voice, video conferencing, screen sharing, etc. The free version of Microsoft Teams offers all the basic features and functionalities you’d expect from a telecommunication tool and more. The free version provides much of the functionality of the Teams such as unlimited chat messages and search capabilities, 10 GB of shared storage across the application, and audio and video calls among members. It also allows you to enjoy real-time collaboration using your favorite Office apps, Channel meetings, and screen sharing capabilities. However, the free version has a maximum users limit up to 300 and the file storage is limited to 2GB per user.

What is Microsoft Teams Paid?

The paid version is the more robust version of Microsoft Teams which is available through Microsoft 365 Business subscription and provides all the features of the free version plus a whole host of other exclusive features. Microsoft has invested heavily to make Teams the face to all other Office services. The paid plan starts at $5 per user per month and goes up to $20 per user month for the Enterprise plan which comes with support for unlimited number of users. The features included in the premium version includes 1TB of storage per organization, Exchange email hosting, access to OneDrive, SharePoint, and other Office 365 services, advanced security features, and 24/7 support for both mobile and web for other administrative tools.

– The free version of Microsoft Teams has its limitations in terms of features, such as a maximum member limit of up to 300 but Microsoft has recently updated the limit to 500,000 members per organization. But, in the Enterprise Plan, there is no limit to the number of users which can be added. Talking about storage, the free version of Teams provides a storage space of 2GB per user and in addition, they also get an additional 10GB of shared storage, whereas the paid version gives you 1TB of storage per user. The paid version also provides some exclusive features which are not available in the free version, such as meeting recording, phone calls, Firstline worker features, configurable user settings and policies, and more.

In a nutshell, if you do not want to buy the Microsoft 365 or Office 365 subscription package and still want to enjoy all the basic features of a telecommunication tool like chats and video conferencing, content sharing, and search capabilities, then you can sign up for Microsoft Teams for free. However, you cannot have all the integrations and benefits that Microsoft 365 provides, but you will have Teams. All things considered, the free version of Teams is a good deal if you do not want all the bells and whistles of a full-fledge telecommunication application. The paid version provides everything the free version offers and much more including some exclusive features.

Outside his professional life, Sagar loves to connect with people from different cultures and origin. You can say he is curious by nature. He believes everyone is a learning experience and it brings a certain excitement, kind of a curiosity to keep going. It may feel silly at first, but it loosens you up after a while and makes it easier for you to start conversations with total strangers – that’s what he said."
Latest posts by Sagar Khillar (see all)
Share Tweet Pin Mail SMS
Categories: Technology
Tags: Microsoft Teams Free, Microsoft Teams Paid
previous post Difference Between DevOps and DevSecOps
next post Difference Between B2B and B2C Marketing